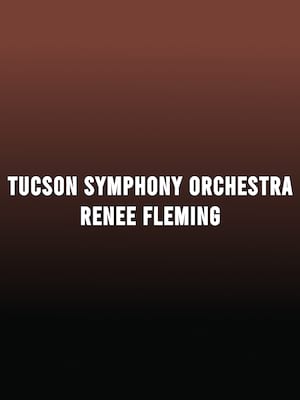 her unmistakable voice is remarkably well-preserved, and the evening showcased her versatility

Captivating soprano Renee Fleming will be joining the Tucson Symphony Orchestra for a special performance in February, bringing her unmatched vocal magnificence to the Tucson Music Hall on Feb 6th. Award the National Medal of Arts (America's highest honor for an individual performer) by Barack Obama in 2012, Fleming is one of this generation's greatest artists and a true national treasure.

Beginning her professional career whilst still studying at Juilliard in the 1980s, Renee Fleming has left audiences spellbound across the globe, with a host of awards including multiple Grammys, Classical Brit Awards and an Honorary Doctor of Music from Harvard. The Conductor is the Venezuelan born Jose Luis Gomez, Tucson's own Music Director whose previous work includes orchestras around the globe such as the Royal Liverpool Philharmonic, New Zealand Symphony and the Oslo Philharmonic.

Sound good to you? Share this page on social media and let your friends know about Tucson Symphony Orchestra - Renee Fleming at Tucson Music Hall.